In 2014 I [Micaela] published a study on human birth seasonality and childhood disease in Proceedings of the Royal Society Biological Sciences as co-first author with Kevin Bakker. Using data from countries throughout the Northern Hemisphere, we found pronounced seasonal fluctuations in human birth rates. We demonstrated that the timing of the seasonal birth pulse varies from place-to-place. Regions further from the equator have a birth pulse that occurs early in the year, while places closer to the equator have a birth pulse that occurs later. We showed that birth seasonality is important for the study of childhood infections, because large seasonal influxes of infants into a population can interact with the transmission of diseases such as measles and polio to either exacerbate or dampen the size of epidemics. 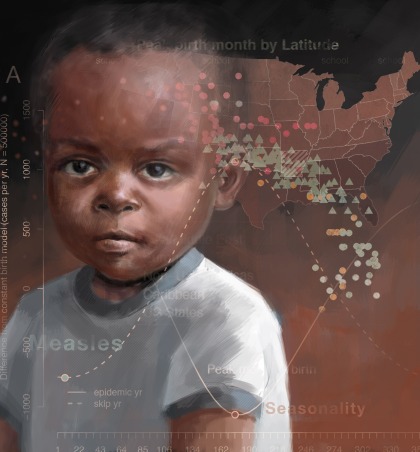 Seasonal changes in birth rates occur across the globe, this seasonal varition can interact with the transmission of measles to shape disease epidemics (Art by John Megahan).

Here is our manuscript:

The size of measles epidemics can vary depending on the timing of the seasonal birth pulse. The x-axis covers 2 years because we were modeling measles outbreaks that are biennial (i.e., an outbreak occurs every-other-year during the same seasonal window). The solid line shows what would happen if the birth peak occurred the first week of the year. As the movie loops through, the birth peak is being changed from week 1, week 2,…, week 52. The reason the timing of the birth pulse matters is because measles is seasonally transmitted. Thus, if the birth peak happens during the high transmission season, then the influx of susceptible infants makes the epidemic bigger. The take away is that seasonal host reproduction can influence the incidence of disease.

This work garnered some media attention. Below are select news releases.

Why Northerners are Born Earlier in the Year than Southerners in The Business Insider.

A Time to Be Born: Why do birth rates peak at different times in different places? in Slate Magazine.

When are Moms Most Likely to Make Babies? video by DNews

Here are also some more general interviews about why susceptible recruitment (via births) matters for childhood disease dynamics: